Have you noticed how we’re already past January and so one twelfth of the way through 2015? I know it’s really cliched for me to open these posts like that but seriously, it’s February already. February. Ridiculous.

January on Creative Splurges was, as Januaries often are on this blog, a bit busier than most other months. In the past this has been because I would often shoot a lot over my Christmas break, but since I’ve adopted a ‘post every Tuesday’ routine this impact has been removed. Still, January also traditionally contains a few extra posts on top of my usually scheduled ones, which has helped make January the joint-busiest month since last January (tied with last June).

January started similar to last year: with a roundup of the previous year. I used to put these out on December 31st, but both 2014’s and 2013‘s reviews were late just because I did not finish them time. I might officially move the intended release date to January 1st instead, keeping in line with my monthly reports which appear on the first day of the following month, but I can also see the benefit of releasing it on New Years Eve. I’ve got eleven months to figure it out, I guess.

My next post was another annual January post, 2014’s year in pictures. The ‘Year in Pictures‘ posts are some of my favourites of the year, because it’s not often I get to post the creme of the crop all together in one assortment with no context or explanation other than them being some of my favourite images.

The first Tuesday post was yet a third another annual tradition, The End of Xmas. I’ve taken an image on that theme almost every year since I first got a DSLR six or seven years ago. This year I decided to try something a little different from my usual shot of a tree ornament on the floor amongst fallen pine needles (although I also took one like that for good measure) and instead focussed on the tree itself, as it sat out alone by the bins, discarded. I shot it using the lens I hired over the Christmas break, and I’m pretty pleased with it – although did you notice the Freddie that snuck into the shot? Truth be told I noticed him long before I posted the image and it led to much though about whether it was worth posting that image, which was the more pleasing, or the slightly closer shot of the tree that was Freddie-free. I eventually decided to run with the former, figuring that the cat doesn’t detract too much from the photo. 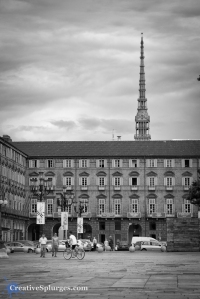 The next week saw the return to my series of posts from my European road trip, as we made it to Turin, Italy, our last stop on our journey to the south of France. The series of posts has done pretty well, generally, as people seem to like my travel photography. Turin was the closest to more candid, off the beaten path travel photographs, as we were staying in a part of the city that didn’t seem particularly touristy. It meant I got some pretty decent shots of what I hope is the real Turin. With the story of our journey to our week-long stop on the Côte d’Azur now complete, I’ll be taking a short pause from posting images from that holiday to focus on some of my more recent images, but I’ll return to them soon. I still have the images from the week in France and the return leg to share.

The day after I posted Turin was Creative Splurges‘ fourth birthday. Even more tradition, as I posted my annual mirror self portrait. The theory is that every year I get in front of my bathroom mirror and photograph myself to the best of my ability, thus showing the progress I’ve made as a photographer. I actually shot the images for this post over a week earlier, when I still had the hire lens. Hopefully you can see some progression in my skills, if nothing else I think they show I’ve ben thinking about my composition a lot more than I used to. At some point I suspect I’ll feel I’ve outgrown the constraints of shooting only in a mirror, but I quite like the idea of working to the same set of rules year-on-year. I’m also thinking I should do something a bit more special next year for Creative Splurges‘ fifth birthday.

This was followed the next week by Macro Chocolate, a bit of an archive post from November. It’s been a while since I set up and photographed some food, and I used the techniques I’d learnt from making a mess photographing some cereal a while back. I haven’t often had the sense to use a tripod for macro closeups so the images turned out really well. I’ll probably use that setup in the future, as it works out as a pretty good replacement for the kitchen window I used to use for such shoots (although in many ways better because I’m not relying on natural light). 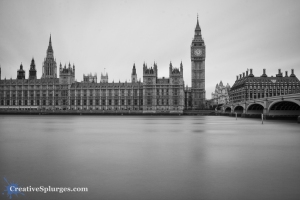 The final post of the month was from the main walk I took with the kit I hired over Christmas. London by the Thames contains some of the best photographs I think I’ve taken in a while, the sort where I’ve been measured and considered in my shooting, not least because a single picture involved setting up a camera, tripod and filter, and then waiting for at least three minutes for the exposure. I’m also really pleased with the more street-style photography I took with the 50mm f/1.4. I really like how that lens performs wide open in street environments like that. Now I own one I definitely want to use one on walks more (spoiler: I already have). I think the Lee Big Stopper I hired is a bit rich for my blood, but I am planning on buying a cheaper dedicated ten stop filter because the variable one I have just isn’t strong enough for the images I’m trying to take with it.

Something else happened in January which I think is worth a mention. I don’t usually talk of stats and hits and likes on this blog since that has long since stopped being important to me when writing and posting. However, what is worthy of mention is my Flickr stats, because about a week ago I passed a quarter of a million total hits on that service. That’s been driven mainly by a constant and sustained interest in my dance show images; as further proof that I myself don’t understand what interests people in my own photographs, my most popular shot on Flickr is this one, which has approaching 7,000 hits on its own for reasons I can’t even begin to fathom.

Looking to February, I’ve a few things in the works. For the first time in a while I’m approaching what I might call a backlog of images, with several trips’ worth of photos to edit and share.

I’ve also been considering some improvements to this site, varying from simple aesthetic changes to a more fundamental overhaul. On and off over the last year or so I’ve been exploring changing the skin of this site to something more contemporary, but never found a skin that doesn’t compromise in one way or another. However I have shortlisted some where I think the pros might outweigh the cons and WordPress have released some themes recently which have impressed me, so I’m continuing to play about with them in a top secret testing environment. Appearance is not the only part of this site I’m looking at improving; I don’t think things are quite right in general, I’m not entirely happy with the quality of my writing and there’s something about the structure of this site that doesn’t sit right with me. I don’t think first time visitors to creativesplurges.com will be that impressed, let’s put it that way – and I’m currently putting thought into how I can rectify that.

For now, Creative Splurges continues as it is. But hopefully there will be some changes for the better not far down the line. If you’ve any suggestions, put them in the comments below, or use my anonymous suggestion box.

Thanks you, as ever, for reading.
Rob