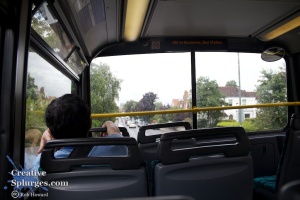 It seems that just about every month at about this time I sit here and reflect on my amazement that another month has already been and gone so fast. This time, however, I know exactly why the month has shot by so very quickly – the two week break I took in the middle of the month which helped expedite the month quite pleasantly.

For my summer holidays this year – which I usually take in September because 1) it’s cheaper, and 2) it’s right before work hits the ‘busy until Xmas’ phase – my wife and I visited Tenerife. Although we only visited for a week, as we were flying out and back on a Tuesday we took two whole weeks off of work, which rather nicely meant that there were only two working weeks in the month. Makes things run a lot faster.

If the month of September can be summed up in a word, it would be this: catchup. Which is technically wrong because although ‘catchup’ is a word it means ketchup. I suppose I meant catch-up, but does that count as one word? The point is, you know what I mean, and it isn’t condiments.

Save for my holiday, where I took over 2,500 photos, I haven’t done a huge amount of shooting this month (actually, when I put it that way, I’ve done quite a lot of shooting this month, but there’s not been a swathe of images). I still have a backlog I’m working my way through dating back several months, and every post in September contained images taken in July or earlier – with the exception of the single taster image from my Tenerife trip which I snuck into the opening of this post.

As I race to catch up with myself I’ve also been posting shorter posts of smaller collections of images, which are the ones that often get left behind when I’m running through a lot of posts. There’s still a few of those amongst the over a dozen posts in my ‘to write’ list.

Although I’m still working roughly chronologically when it comes to picking through the backlog, I’ve occasionally mixed things up a bit in the name of variety.

I started the month with a small handful of images from a short trip to London, where we had been beset by scooterists outside a toy store. The post only contained four images, but they came out pretty well for spur-of-the-moment shots on a busy street. I would have preferred a slightly less busy background, perhaps, but all-in-all it could’ve been worse. They were good enough to post, for a start. It’s about as close as I’ve gotten to street photography recently. I do hope that, one day, I’ll be able to overcome my self-consciousness when it comes to photographing strangers in public, because I’d love to do more street photography.

And that was the only post I managed to get out before I left the country. Before leaving, though, I decided to queue up a few posts to keep things ticking over whilst I was away. Ironically, the week I was on holiday contained half of the month’s posts and was therefore quite a busy period. 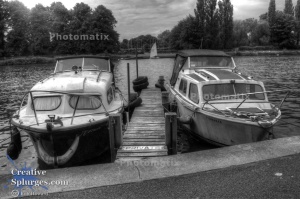 The first post, published on the day I flew out, was a collection of random images from a handful of separate trips to Kingston. I tend to pop over there quite often, it’s quite a nice cycle ride or a relatively relaxing bus ride to get to, and being by the river often has something to see. Sometimes, I’ll end up with a post’s worth of images in one trip, but other times I’ll only take a couple of images and stick them in a pile until I figure out what to do with them. Often that will mean a Daily Photo exclusive, but on this occasion I decided to group a bunch of them together. 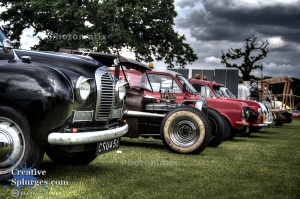 The next post that published whilst I was away was the biggest one of the month, a batch of photos I took at Byfleet Parish Day back in July. It took quite a while to process these images; most of them are three-exposure HDR shots, and I wanted to process each HDR before deciding whether it was worth keeping or not, making it take that little bit longer to work through them all. I was fighting a constant battle in my head whilst processing them, trying to gauge how realistic I wanted the end results to be. In some instances HDR can be used to overcome the limitations of how a camera sees things compared to the human eye, giving a realistic shot you don’t immediately realise has been so processed. But you can also use HDR to create a surreal shot that has clearly been doctored. I enjoy examples of both schools of processing, but I think I – subconsciously or not – tended towards the surreal end of the spectrum in the post. I’m still very pleased with the end results in the post, especially the one above left. 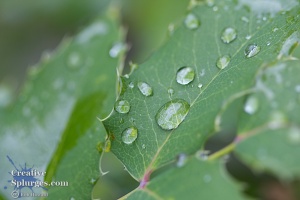 The next post was another short set of images, this time some gratuitous shots of a wet bush some macro shots of water droplets on leaves. The photos were taken on a day when I was on my way out somewhere and didn’t make it to the end of the path before I had my camera out.

At about the same time as I was taking those photos, Catherine from CJ Trigg Photography was posting similar images to Instagram, one of the many occasions when we seem to be thinking along the same lines at the same time completely independently. For a while a few months ago I was actually working hard on getting posts out quicker in case Catherine was working on something similar. That obviously didn’t last all that long.

I followed up the macro post with another that had been sitting on my hard drive for a while, a few shots of the ingredients to a meal I cooked some time ago. I say ‘some time ago’ because I can’t actually remember when it was. It was a nice meal and all, but not that memorable. I do like however the fact that the post shows the change in me from a few months ago when I did nothing but complain about my creative block – here I was, actually delaying dinner in order to photograph some cabbage.

The ingredients post was published the day before I returned to the UK, and was the last one I had scheduled for the time I was out of the country. When I got back, I decided to continue my time off and take a break from working on this blog too. After some manic time at work and a huge backlog of images to work through here, I felt I needed it.

When I returned to work, I finished off a post that I had started before I went away (you know, I like the phrase ‘I went away’; there’s an air of ‘anywhere but here’ about it. ‘I am going away. Any direction, any distance, anywhere but here’). When I started it I had intended it to be a bit of an exploration of the subjective nature of photography. I quickly realised a post of such scope is completely beyond me, but I still wanted to ponder the juxtaposition of opinion between me and my readers on certain images. Ultimately, it was an excuse to post the two images of the train carriage aisle, with the ‘difference of opinion’ angle giving me good reason to post both of them. The post did end a bit suddenly, which I kind of liked, but it would have been nice to explore the concept in a little more depth. Although I was (and remain) nowhere near completing the run through of the images I took on holiday, I snuck one in to the opening of the post.

I followed up that post a few days later with a quick Instagram collection, as I tried to ease myself back into writing. I’m not sure how much it did because there was so little text, but I think it was good for me to have the confidence in putting out a post with so little explanation for once – I usually feel the need to explain everything.

The final post of the month was one dating back to the mire of my Olympic photographing, and the first of the sets to come that are the tangents I took whilst covering the Games. Some Scenes from Teddington Lock contained a handful of images (I keep on using that phrase. What, exactly, constitutes a “handful” of digital images, you might ask. Especially since drives containing hundreds of gigabytes – and therefore thousands of full-res photos – can easily fit into the palm of your hand these days. And the answer is, I hadn’t thought of that. I should stop using it in future, I guess) that I shot whilst making my way for the first half of the men’s road race in Twickenham to the closing stages in Kingston. It was a bit of a mixed bag, but not a bad selection of images.

Quite unusually, I snuck out that last post on the last day of the month. Most months at that point I’m working flat out to complete my monthly review as close to the end of the month as possible. Fortunately the last day of September was a lazy Sunday this year, meaning I could chuck out the post in the morning and work on my review later in the day.

As is customary for these reviews, I also take a look at the stats for the month and see how things are getting on. Truth be told it’s not good; The Daily Photo has continued its seemingly inexorable (and yet weirdly constant) decline in numbers, hitting a nice round 200 hits in September, down from 251 the month before and 280 the month before that. Creative Splurges had a paltry 319 hits, more than the Daily Photo but nothing compared to the previous month’s total of 937. Part of the reason for this precipitous decline is a lack of gallery-based posts this month, which helped inflate July and August’s counts, but September’s count is only 25 hits above February’s total of 294, the lowest monthly total this year. I also think the quality of the content was a bit lacking this month. I don’t think there were any posts I was truly excited about in September, and it showed. Fortunately I don’t write this blog for the hits. Well, not just for the hits.

So what will October hold? Well, I want to get the photos from my trip to Tenerife out this month. I’ve not done much editing of them save for the small amount I managed to do whilst killing time on the plane home, so there’s a lot to go through, including a few bracketed exposures. There’ll certainly be more than one post from the trip, so keep your eyes peeled. I also have a couple of trips planned; next week I’m off to a safari park for a photo day my wife got me for Xmas (yes, last Xmas. I can be a bit slow at cashing those things in). The week after that I’m on a course to learn how to use my new flashgun, a course which I got when I bought my new camera (yes, in July last year. I can be slow at cashing those things in too). Those are the only two planned outings, but I’m sure others will turn up unexpectedly. I also have plenty of other photos I want to show you, but in October I’m going to give preference to the new images over the backlogged ones. Things seem to work better that way.

Thanks, as ever, for reading.
Rob

2 thoughts on “So Long, September”