My wife Holly has her own blog, Getting the Hang of Thursdays. For it, each week she picks writer’s prompt at random and writes up a creative piece based on said prompt. I’m tempted to try something similar myself sometimes.

For her most recent story, which she was intending as a children’s story, she decided that it needed a few illustrations, and commissioned me to come up with them. Because presumably Quentin Blake was busy.

The story tells the tale of a superhero who has a bad hair day – and that’s all you need to know for the purposes of this post. If you want to know what happens, head on over there and read it for yourself.

The first image I was asked to create was the hero himself, Mr Supremo.

I’m actually quite pleased with how this turned out. Unlike my previous set of doodles, this wasn’t drawn entirely digitally – it was started the traditional way, with paper and a pencil. 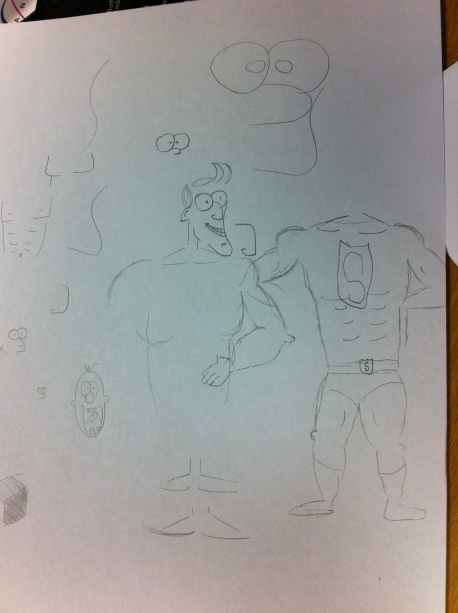 You might notice the full body on the right side of the page has ridiculously short legs. When I could practise no longer, on a fresh sheet of paper I gave it a go.

After drawing the character in pencil, I inked it to clean things up (Holly requested I beef up his chest to ridiculous proportions). 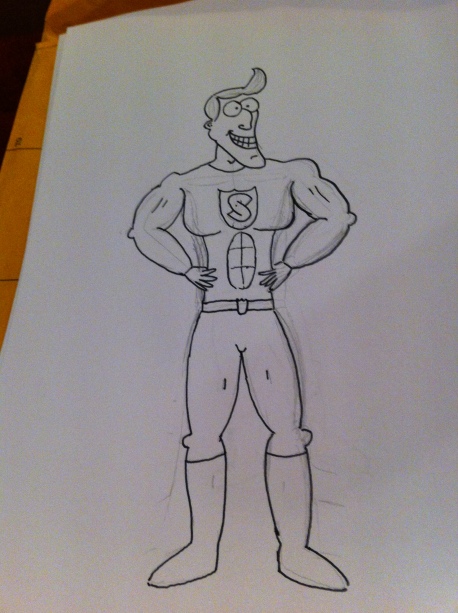 I then scanned it into the computer, and used Photoshop to enhance the inking, and colour in the image. I deliberately decided to go for a scruffy look with the colouring in, not keeping to the lines. With solid blocks of body it would have been easy to just use the paint bucket tool and colour it in solidly, but I think it would have lost something and looked too artificial.

The second image comes later, whilst our hero is having his bad hair day.

For this image I didn’t need to draw the whole body, so I again let the bottom of the image taper off untidily. I also added a background colour due to the whiteness of his shirt which I think works better than a plain background.

When it comes to drawing, one thing I am not is consistent. The only characters I’ve ever been able to draw reliably – all, I should add, part of the Harry canon – have been simple and therefore easily repeatable. Mr Supremo is far more of a character than anything I’ve really drawn before (mainly because he was created and described by Holly, who has a vivid imagination) which made him difficult to repeat. The second drawing was created on paper again, this time by tracing the first image, but repositioning his arms and putting him in a shirt. I then inked it as I did the first.

It was then scanned and coloured.

It felt good to do some ‘proper’ drawing again. It’s been many years since I last did anything other than small, inconsequential doodles. Don’t, however, expect me to drop the camera and start drawing everything instead. Not about to happen.