For all of my waffling about my favourite photos throughout 2011, I think my absolute favourite photo was one my brother-in-law sent to me on Xmas day. 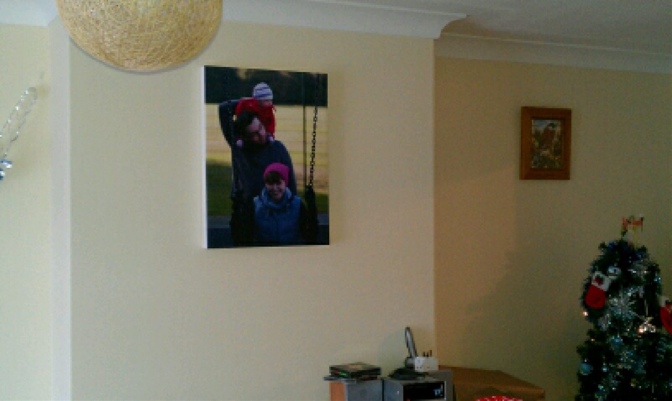 On the wall is a canvas print of one of my photographs. Here it is in all its glory:

Word can’t really express how I feel having someone like one of my images enough to get a canvas printed, let alone make it an Xmas present for a loved one. In fact, my brother- and sister-in-law also used another of my photographs as a gift for family, and it is these two events which are helping fuel a desire to get into portrait photography. This is another of my ‘resolutions’ that I forgot to add to my round-up post.

I’ve taken the odd good picture of family members, but I don’t usually post them here; mostly this is because there isn’t the context to put a photo in, and it almost always feels weird to post a picture of a family member (with the exception of my wife, who is used to turning up in posts on this blog looking very bored indeed).

I’ve decided I really want to get over that particular hangup, especially since it turns out the macro lens I bought at Xmas doubles as a stunning portrait lens and I want to try taking more (oh look, another excuse to use that macro lens. I knew I’d find one).

I’m spurred on, in part, by photographs from Andy Gotts. These images are truly incredible. If I can get anywhere near this level of photography I could die a happy man (preferably in a bizarre accident involving chocolate and lesbians – actually, if that were to happen, I’m sure I’d die a happy man regardless, provided the lesbians aren’t the truck-driving kind).

Normally, the only people I can practise portraits on is myself. This image should look familiar if you’ve ever check my ‘About‘ page:

There is an alternate version of this image in which I’m looking at the camera; I never thought that much of it until looking back at it for the writing of this post, but in retrospect, especially having played about with the image a little, it is perhaps better than the last image.

There is a stronger connection between the viewer and this latter shot, I think, because of the eye contact caused by looking at the camera. I’ve also cropped the image in a bit to get you closer to my face. Also, portraits look better in black and white. I’m sure I read that somewhere.

The other person I can practise on from time to time is my wife, but she has a bit of an aversion to cameras, and tends to photograph pretty badly when she knows there’s a camera pointed at her (which is part of the reason why you almost always see her not noticing she’s being photographed when I put pictures of her up on this blog). Still, from time to time she has an unguarded moment.

Other than my wife, I have family gatherings where I might be able to grab a shot of someone. This is a photograph I took of my mum last month.

Annoyingly, that is a smidgen out of focus. You might have started to realise I like to shoot my subjects with a strong light from one side, preferably from a window (not least because I don’t have an off-camera flash).

I also have some nieces, nephews and a second cousin to photograph from time to time. Fortunately these kids have grown up around cameras and so are pretty used to them. It also helps they are cute as proverbial buttons (I’m not exactly sure which proverb that one is from, perhaps someone more familiar with the scriptures could enlighten me).

My wife loves the juxtaposition of those two images: wide-eyed innocence in the former, plotting the downfall of humanity in the latter. I admit I didn’t notice it until she pointed it out.

The former image is also another case of me having two separate halves of a good photo. That shot is the better composed; one taken slightly before is not as well structured, but the subject’s eyes are more in focus, which makes so much difference in this sort of photography. You can see from the EXIF info that I was struggling with low shutter speeds in the indoor light; in retrospect I should have pushed the ISO a bit higher.

Finally, we come to my niece, who will be a year old in a month or two (or three. I’m sure I wrote it down somewhere). She is perhaps one of the most photographed babies in existence, having to put up with both me and her grandfather (my father-in-law) battling for decent photographs.

I do sometimes wonder what things will be like for her generation. For people of my generation and older, the baby photos are almost a rite of passage for any boy or girlfriend visiting the parents for the first time, but they tend to exist only in printed copy, stored away somewhere safe in the loft and only brought out on an occasion. For people of these kids’ generation, baby photos are both more plentiful, and only a few mouse clicks away – Facebook will be a treasure trove of these images, if they don’t ever delete anything and maintain the ‘timeline’ feature. Will it be common and not that big of a deal when mum breaks out the baby snaps?

This next shot is the one that was sent as an Xmas gift to her grandparents.

Both of these pictures were taken with my ‘nifty fifty’ 50mm f/1.8 prime lens. At other times, however, I’ve used my work-a-day 18-135mm lens to get interesting results. I like this shot because it’s down at her level (even though she is looking at me, not the camera).

This shot is less a portrait, more a photo of something happening, but sue me, where else am I going to put it? Plus, I like this shot. As you can see, I’m becoming more confident at pushing the ISO, although there is a bit of noise that has crept in to the image – fortunately on this occasion it looks more like film grain rather than the typical colourful noise that you see in digital photography.

That will be the last colour photo in this post. I like using black and white for portrait photography; I may have joked about it earlier but I do think using it adds definition to the image (especially when, as is the case in the next image, the subject is wearing clothing of a colour close to the colour of their skin).

I’m going to do my best not to go off on too much of a tangent about the macro lens I used to take these shots, but forgive me, because I’m probably going on one anyway.

One of the things I love about said macro lens is its sharpness. I have no real idea – other than just it was more expensive and so, theoretically, has better optics – of why it is capable of getting such sharper, clearer images than my other lenses. This next shot is about the sharpest image I have ever taken, and I’ll need to get used to taking pictures this sharp if I ever want to do this area of photography successfully.

I am so astonishingly impressed at how sharp her face is in this photo. It amazes me every time I see it. To further this, I also created a cropped version, which if anything shows off the sharpness better.

I’m not really sure how this one came out so sharp compared to many of my other images. Maybe it’s just luck that various elements came together at just the right moment. Or maybe I’m getting better. I’m sticking with the former for now.

I’m really enjoying the results I’m getting from trying this branch of photography. The only problem is, compared to most other areas, it requires other people, which limits how often I can play about with it (unless I keep photographing myself, but nobody wants that). Still, hopefully I’ll be able to bring you more in the future.

The photographs of children in this post were included with the permission of their parents.